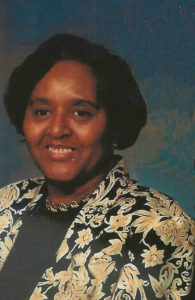 On April 20, 1935, Jeanette Frazier (then Roberts) was born to the union of Hollis and Susie (Williams) Roberts. Jeanette, the seventh of 11 children, lived in Cincinnati only to the age of 10 because her mother died after a long illness. Jeanette loved her mother very much, and her death began a very traumatic era for Jeanette because it also resulted in the dispersion of all of her siblings. Being one of the youngest children, Jeanette and another sister were sent to Dayton, Ohio, to live with their grandmother.

In Dayton, Ohio, Jeanette attended the Willard and Garfield Public Schools, and graduated from the Paul Lawrence Dunbar High School in 1953. One year before Jeanette graduated she was at a friend’s home when a group of boxers passing through to Canada happened to be visiting. There, she met Stanley Neil Frazier who told her that she was going to be his wife.

Who would have guessed that down the road Stanley would later become the pastor of Emmanuel Tabernacle COGIC, and then the Jurisdictional Bishop of Minnesota, which made Jeanette the “First Lady” of the State. Still in high school, Jeanette’s and Neil’s relationship advanced to courtship through letters, visits, and telephone calls and continued for 18 months.

At the age of 19 Jeanette packed her small belongings and moved to Minneapolis where she found a boarding room to live and a job. Her only regret was leaving her niece Maxine, who she helped raise from the age of one.

On September 13, 1953, nuptials vows were shared in Liberty, Indiana, and Jeanette Ruth Roberts became Jeanette Ruth Frazier. To this union, four children were born: Sankara (Greg), Cheryl, and the twins Mark and Beverly. Also nurtured in the Frazier home were Teena (sister of Mother Frazier, deceased), Dhonek Tekle (foster daughter, native of Africa), and many other relatives.

Mother Frazier has been blessed with seven grandchildren, six great grandchildren, and one great-great grandchild. When Mark and Beverly entered school, Mother Frazier says she prayed and asked God for an opportunity to work “where I could help someone and also take care of my family properly.” She labored untiringly on a “gratis” basis in order to help the many troubled youth. She believed that her many successes with the youth of Minneapolis Central can be attributed to her earlier involvement with youth with the Minneapolis Public Schools. Her unique rapport could be attested by the fact that the Frazier home became the “community home” or “place of refuge” for the troubled youth, where they could gather in a non-threatening and positive environment.

During a strike of the Minneapolis school teachers, her prayers were answered and she was blessed to work at each school her children attended. In as much as Mother Frazier had established a very real relationship with God on April 20, 1947, at the tender age of 12, she knew the power of prayer.

Jeanette will be greatly missed by all of her “Little Friends” she had the pleasure of meeting throughout her 29 years working at Bryant Phillips, Central and Sanford Minneapolis Public Schools.

This obituary was submitted by Tamara Ballard.