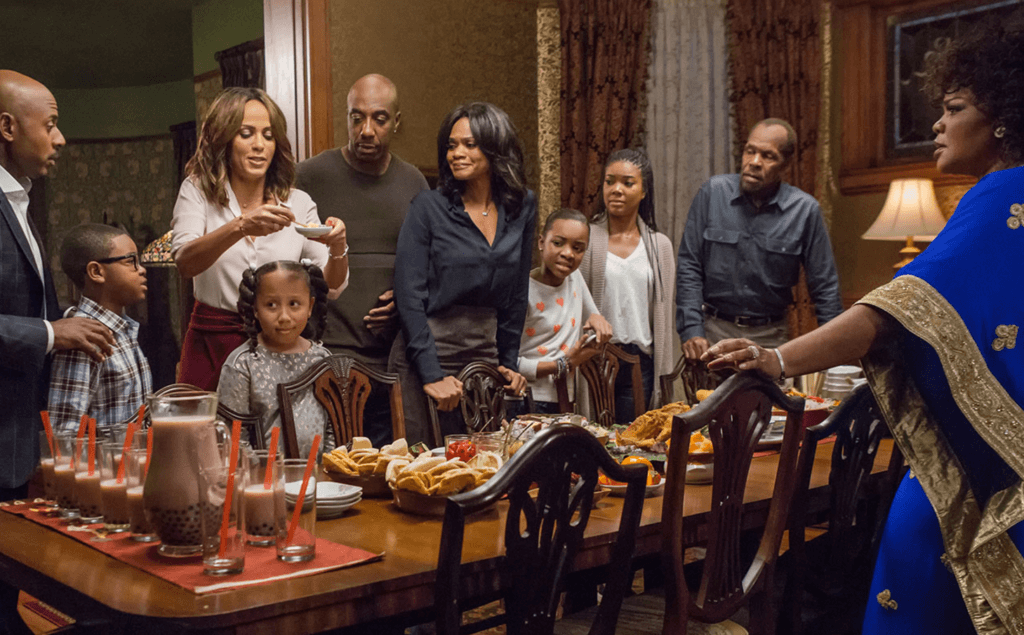 Watching this humorous film is like getting a funny greeting card that makes you laugh as it warms your heart. This ode to the joy and angst people feel as their family reconvenes for the certain chaos, gluttony and joy during Christmas is a nice way to start the holiday season. It’s a very entertaining stocking stuffer. It’s comic relief.

Under writer/director David E. Talbert’s (First Sunday) guidance you know there will be equal doses of merriment and inspirational message. Toss in producer Will Packer’s (Think Like a Man) sensibility and you can pile on the silliness and bawdy humor.

What’s on view is a raucous comedy that feels almost TV sitcom-ish. It’s seasoned with enough soap opera-ish drama to make you laugh at the characters and be astonished by their mischievous schemes.

Walter Meyers (Danny Glover, The Color Purple), the successful owner of several auto repair shops, eagerly awaits the arrival of his four adult offspring and their extended families back to the Atlanta home they grew up in. He looks forward to their smiling faces, is somewhat saddened that his deceased wife Grace won’t be there and is frankly wondering if his kids can set aside their differences for five days so they can enjoy the holidays. Fat chance.

His youngest daughter Rachel (Gabrielle Union, The Birth of a Nation), a perpetual law student who is low on funds, brings her young daughter and the grudge she bears for her older, far more successful sister Cheryl (Kimberly Elise, For Colored Girls), who is a dental surgeon. Big sis is coming with her flaky, conceited, retired basketball player husband with wandering eyes, Lonnie (JB Smooth, Top Five).

Christian (Romany Malco, Think Like a Man), the oldest son, is running for Congress and no one knows if he can forget campaigning long enough to focus on the family. His wife Sonya (Nicole Ari Parker, Murder in the First) is skeptical. Evan (Jessie T. Usher, Independence Day: Resurgence), the baby of the family and a popular football player, is just getting off the disabled list and has a jones for painkillers, unbeknownst to the rest of the clan.

And to add a bit of hot pepper to the mix, Aunt May, played with verve by scene-stealer Mo’Nique, adds just enough naughty humor to please adults and warrant an MPAA PG-13 rating.

Playwright-turned-filmmaker David E. Talbert has a very assured style that involves “comedy in the midst of chaos.” One minute there’s a verbal brawl and the next moment everyone is laughing. This rhythm serves his plays and screenplays well, keeping audiences engaged through his explorations into the sometimes awkward dynamics of friendships, marriages and relationships. Comparisons to Talbert and Tyler Perry are inevitable. The difference is that Talbert is far more consistent as a writer and director.

Gabrielle Union and Kimberly Elise rattle off catty one-liners like they were schooled on Edward Albee’s vicious Who’s Afraid of Virginia Wolf. For female viewers, Epps is the romantic ex-boyfriend who got away. Usher and Young Fly will keep the younger audiences engaged. JB Smooth is hysterical as the out-of-touch playboy who is courting disaster.

Perhaps the smartest bit of casting was giving Danny Glover the role as the dad and referee. His strong acting brings more to the role of Walter than most performers could summon. Strong, humbled, determined and embittered are just some of the emotions he shows over the course of one hour and 52 minutes. When he screams to his out-of-control family “It’s my house,” there is no question; he is the lord of the manor.

John Paesano’s impassioned musical score is supplemented with appropriate soul, pop and jazz tunes like Etta James singing the sultry The Very Thought of You. Wynn Thomas’ production design and Marthe Pineau’s set decoration make Walter’s house an enviable abode and the aisles of the Piggly Wiggly a perfect place for extramarital flirtations. Larry Blanford’s photography and lighting give the footage a warm glow. The editing by Troy Takaki adds a solid beat.

If you’re looking for Shakespeare, try another theater. If you want a good stick-to-your-ribs family comedy that will make you chuckle and forget your troubles, pull up a chair and sit down.

The spirit of the holiday season is in the house.

Dwight Brown is a film critic and travel writer. As a film critic, he regularly attends international film festivals including Cannes, Sundance, Toronto and the American Black Film Festival. Read more movie reviews by Dwight Brown here and at DwightBrownInk.com.