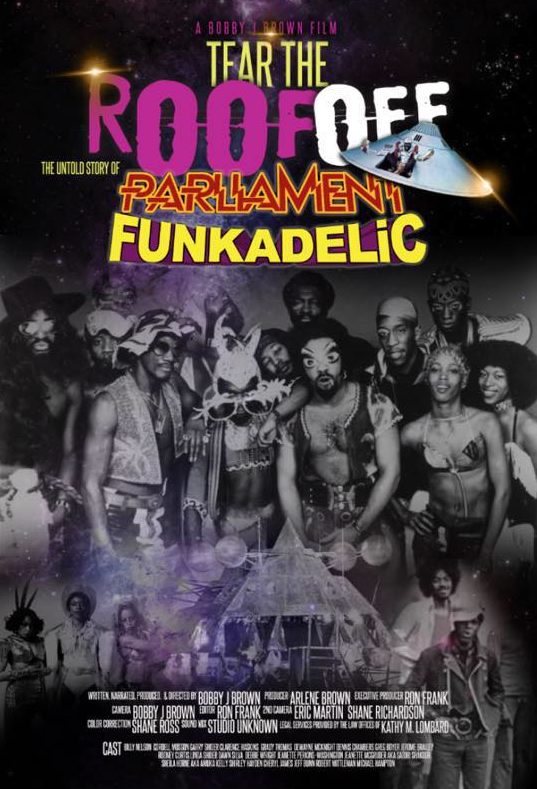 The revolutionary funk band Parliament Funkadelic started in a barber shop in New Jersey in 1956. George Clinton and four others formed a doo-wop group and named themselves after a popular cigarette at the time, performing around the East Coast area. Parliament’s breakout hit, “I Wanna Testify” (1967) was recorded and released on a Detroit-based label.

Clinton also assembled a touring back-up band, but he lost the rights to the name due to a contractual dispute. As a result, he rechristened the five-member backup band under a new name, Funkadelic, on another label, and the five front singers were listed as unnamed “guests.”

Eventually, Clinton got the original group name back and Parliament-Funkadelic became one large group in the mid-1970s. It became a musical corporation with various groups and names but all under the single control of Clinton. Bobby J. Brown tells the story in the documentary Tear the Roof Off: The Untold Story of Parliament Funkadelic.

“They were young kids in the 1950s who hung around the barber shop — they were 14, 15 years old — and George was in his 20s,” said Brown of the original Parliament members. “They were in awe [of Clinton]. George was an entrepreneur and had a dream.”

The film chronicles heartbreaking stories about group members, and paints a complex picture of Clinton — paying homage on one hand, while exposing unflattering stories on the other. During a screening at this year’s Twin Cities Black Film Festival in October, Brown and Jerome “Bigfoot” Brailey, who played drums and percussion and wrote some of the group’s greatest hits, spoke to the MSR.

Brown said he started work on the film after meeting the late Gary Shider, who Clinton recruited to join the group in 1972.  “I got lucky,” admitted the filmmaker. Shider told him he hoped someone would do a film about the group. “I didn’t know who he was at the time,” recalled Brown. “I said if he was serious, I’d be at his house tomorrow — I interviewed him the next day.

“I spent the rest of 2007 until now [working on the film]. As I started to do the interviews, the story went very south,” as each band member he contacted told him their respective stories and corroborated others about exploited talent and lack of compensation.

“I just knew I was the vessel to tell the truth about these musicians that gave us so much love. It was great music,” said Brown. “I didn’t know my story was going in that direction because I’m a big George Clinton fan. When they [band members] started telling me things, my eyes started to open up. He was always in the front, and they were in the back,” said Brown.

Brailey was perhaps the most prominent drummer in Parliament-Funkadelic’s greatest run of hits — he was the drummer for the Five Stairsteps’ one-hit-wonder but classic “O-o- h Child” (1970), as well as The Chambers Brothers. He told the MSR that he was in Los Angeles awaiting the birth of his daughter in 1975 when he got the call from Clinton.

“I was in the delivery room and the nurse came, ‘Mr. Brailey, you have a phone call.’ It was George Clinton asking me if I wanted to join the group,” he recalled. “At the time I was still with the Chambers Brothers. I asked how much he would pay me. It was only $25 more [than] I was making with the Chambers Brothers, but I wanted to be a Funkadelic.

“I went straight from L.A. to Ohio and went on stage with them — I never rehearsed with them [prior to that],” said Brailey, who co-wrote “Give Up the Funk” with Clinton and Bootsy Collins, an oft-sampled classic. He, Clinton and 15 other Parliament-Funkadelic members were inducted in the Rock and Roll Hall of Fame in 1997.

Like Motown’s The Funk Brothers, the label’s studio musicians were, until a 2002 documentary Standing in the Shadow of Motown, largely unknown by the public. Brailey said Clinton too often cast a giant shadow on the other band members.

“We were so young, and we just believed that we would get paid,” noted Brailey of the numerous issues he and other band members had with Clinton. “But he didn’t do the right thing. If I knew then what I know now, it would have been taken care of.”

“Without them, there would be no band,” reiterated Brown on the importance of the super group.

“I want them to know it was not just George Clinton,” added Brailey, who still performs today. He is currently working on a soundtrack for a Kevin Hart cartoon project. “It was about a group, Parliament-Funkadelic, and all of us made that group, not just one person. We came in and just laid it down. We were the ones, the band that attracted the fans.”

“He [Clinton] couldn’t play a musical instrument and couldn’t read music, and he couldn’t sing,” said Brown. “He had all these great musicians — he got lucky.” Clinton never agreed to speak with him in-person or off-camera for the documentary.

Whether or not his film will achieve a similar commercial success as Shadows, Brown nonetheless is proud of Tear the Roof Off. The film was recently awarded Best Film at the Orlando Urban Film Festival. “I hope I make my money back but that’s not the goal,” he said. “I’m a documentarian to get the truth out. If I can do something to get it out there, it would please me more.

“Everywhere we’ve gone, [the film] has gotten a nice response,” he said.

According to the  Facebook page, Tear the Roof Off will be released on DVD sometime mid-2017. Visit Facebook/TearTheRoofOffDocumentary or www.teartheroofoffdocumentary.com for more information.